Khloe Kardashian surprises fans with new photos of her “disappearing” wrists while flaunting a side boob.

KHLOE Kardashian has shared new photos on social media that display her tiny wrists, arms, and side boob.

Fans are worried about the reality star’s weight loss after seeing the new Instagram pictures.

Khloe can be seen in the pictures sporting a pair of thigh-high black leather boots and an all-black halter jumpsuit.

The Hulu star turns to the side while standing in a doorway, flashing her side boob, while posing with seductive looks for the camera.

Khloe displays every curve of her body, her honey blonde hair falling to her waist.

Khloe can be seen resting her head in her hand and leaning against the doorway in another image, revealing her teeny wrists. 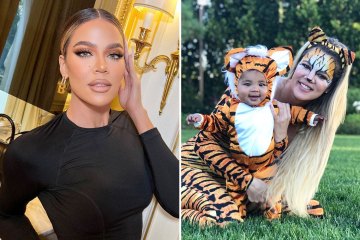 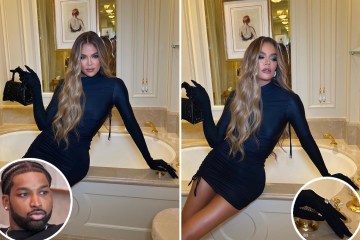 In the comments section of her Instagram shoot, her fans expressed their worries about her rapid weight loss.

Wow you are so skinny, a shocked admirer exclaimed.

“Khlo, I know you been stressed but pleaseeeeee bulk up on some calories,” another pleaded.

Recently, the TV star has flaunted her thinning figure on social media and the red carpet.

Khloe went all out for her various outfits, but others noticed how much slimmer the mother of two appeared. One person wrote: “I might be overthinking this, but she looks way too thin in the face.”

Many other people questioned the Revenge Body star’s sharp jawline as they have become increasingly concerned about her thinning frame.

After Khloe shared a night out with Kylie, 25, on her Instagram Stories, fans once more expressed their concerns about her apparent weight loss.

Following the fashion shows, the sisters went out in more casual attire.

In a tight mini dress and downing shots of their sister Kendall’s 818 tequila, the women are seen in a video that Khloe posted.

Her petite frame caught the attention of admirers when one said: “Her legs are TINY now!!!”

Someone else commented, “She is shockingly thin. I firmly believe that she needs assistance.

At her daughter True’s fourth birthday celebration, the reality star also flaunted her slender waist and arms while dressed in a skintight outfit.

Khloe wore a pink and white Dior bodysuit with a monogram and a pair of skinny matching pants.

She was spotted dancing at the party with True, who was dressed in a Dior dress, in a scene from the teaser for upcoming episodes of The Kardashians.

In April, True turned four, and Khloe celebrated by throwing her oldest child a lavish party with a cat theme.

According to theories put forth by Kardashian fans, her weight loss is the result of her grief over the love child scandal involving her baby daddy Tristan Thompson.

Theo, who is now five months old, was born to Tristan and Maralee Nichols in December 2021.

When he was allegedly in a mutually exclusive relationship with Khloe, with whom he shares a daughter named True and a young son, he had an affair with Maralee.

Khloe described the tragic fallout of her ex’s paternity scandal in the season premiere of The Kardashians.

Khloe affirmed that she was informed when documents were leaked to the media and said she was unaware of her ex’s infidelity.

She revealed that they had done an embryo transfer days earlier and that she and Tristan had already decided to have another child through a surrogate.

It’s just a different experience, in my opinion, even though it’s supposed to be a really thrilling, amazing time. It’s been so difficult. In front of the camera, Khloe sobbed, “I don’t want to celebrate anything.

Khloe further asserted that Tristan pushed the TV star to have another child despite knowing about his love child in July 2021.

The Chemistry Between Corey Sevier and Taylor Cole Began in an Unexpected Way, as Seen in Hallmark’s “Pumpkin Everything”

How to Get Free Online Access to Watch Mariners vs. Blue Jays Playoffs

How to Get Free Online Access to Watch Mariners vs. Blue Jays Playoffs